The brilliant, thin edges of laser light played against the desert sky, creating flickering silhouettes of our destination that evening. It was April 16, the grand opening of the Qatar National Library (QNL) in Doha. The “red carpet” leading to the main entrance was a slightly elevated LED screen flashing images of the library and artifacts of Qatar’s cultural heritage. Signs in Arabic and English declared Qatar to be “a nation guided by knowledge,” signaling the transition from Qatar’s former reliance on natural earth resources to a new era anchored by scientific and humanistic research and understanding. 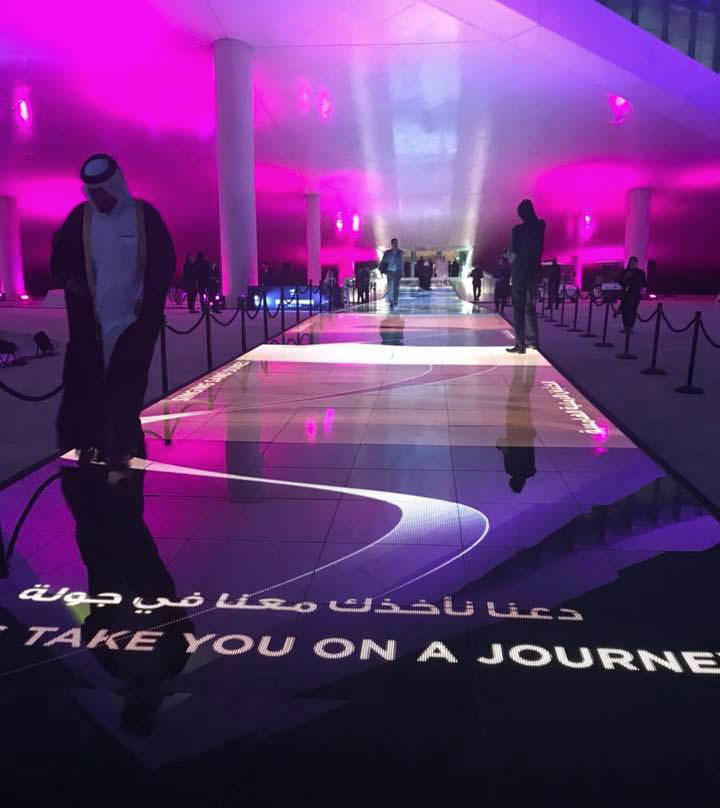 This theme of transition was pervasive. Earlier this century, Sheihka Moza bint Nasser, chairperson of the Qatar Foundation and a guiding spirit of the re-imagining of Qatar, developed the idea for the QNL as a transformative catalyst for new discovery to augment human capacity and our ability to address the tangled challenges we face today. There is something intriguingly audacious about investing so significantly in a physical library in an age that is invariably described as digital, but then the QNL easily balances and elegantly encompasses all manner of contradiction.

Its stone, steel, and wood surfaces frame the glass windows that angle upward sharply, presenting a dramatic interior that appears to soar, with a wide, open atrium surrounded by terraced bookshelves on all sides, making visible each bound copy of the library’s holdings. The architect, Rem Koolhaas, told the audience that the building’s shape came to him when imagining a folded piece of paper that had a few slots on each edge that his eye could peer into. The slots became some of the higher placed windows, while the peaks of the folds transformed into grand triangles of glass. Architecture, he declared, has always meant to heal and resolve tensions; a building of judiciously combined solid materials based on a sheet of  folded paper was, in his imagination, satisfyingly logical.

The resources of the QNL are similarly balanced. The print book collections number more than 800,000 volumes and are continually growing, with another 500,000 books available electronically. The Heritage Collection, a treasure trove of rare books and manuscripts, including a beautiful folio from the Blue Qur’an, is housed in the lower level of the library. It is visible from the main floor as a series of deep, paved aisles between stone blocks that display the special materials in glass cases set into the stone. The effect is of a mesmerizing, unearthed archeological site that coveys the mystery and power of our cultural heritage. 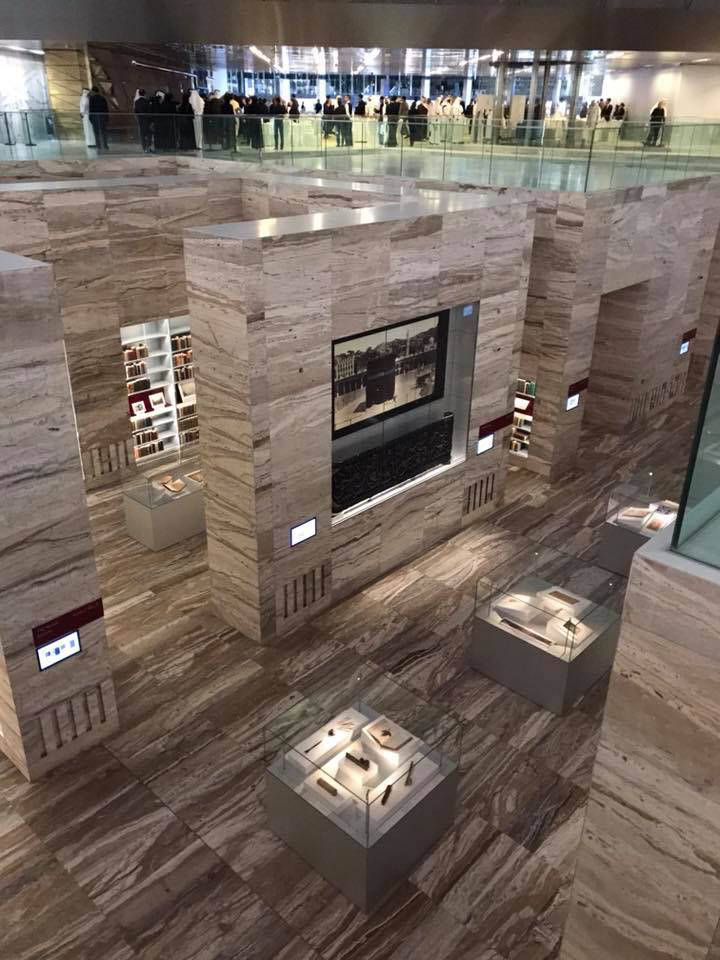 So fluid are the conceptual boundaries of the QNL that, upon reflection, it possesses a motion that transcends its shimmering mass and local habitation. Any great national library, as was described in the opening ceremonies, is both aligned with its country of origin and with the world at large—inherently an international library. Representatives of 52 countries attended the opening, including the heads of many other national libraries, inaugurating a conversation across nations and continents that will explore collaborative efforts and collective interests. A global library of national libraries was mentioned several times. Current technology exists for such a marvelous project, and this will be a priority for CLIR in the next five years, working with all who gathered in Doha and reaching beyond to other collections of tacit, indigenous, and fragile culture: many distinct, integral, and impassioned voices, one world.

Seated on a book terrace while studying my notes for a panel discussion on fake news the week of the QNL opening, it was the brisk slap of small sandals against the stone floor that, like an ancient chant, awakened me to the fuller promise of the Qatar National Library. Children running freely in the open spaces, with their parents often scurrying to catch them, was emblematic of the future. The QNL is constructed to span and embrace generations; young people playing in the filtered sunlight will become the researchers and leaders of generations to follow. The freedom and cadence of those small movements will in turn, we trust, invigorate and frame the progress of our singular planet.

My fellow panelists that evening shared concern for an evident paradox: in an era of unprecedented information access and knowledge proximity we are confronted with distortions of the truth, surreptitious manipulations of the processes core to democracy, surveillance of staggering intimacy, and the commodifying of our interests and affections for resale. The technologies purporting to unite the world and connect us with benign, even comforting affiliation segregate us into divisive tribes, abetting confrontations through fake news that can risk mortal conflict.

We agreed that these circumstances require a new form of literacy: not just an ability to read, but  responsibility for rigorous scrutiny and analysis of words, images, statistics, provenance, and intent of the information that we encounter. Such intensive education and mentoring requisite for this new literacy, with the provision of resources to abet a more enlightened awareness of the amorphous, muddled environment that can ingeniously conceal truth and reality: these are the vital services of the 21st century public library. The QNL, through its vision and mission, is dedicated to and exemplary of these goals.

Welcome the children’s footfalls in our midst, I thought; tomorrow in this library, with ceremonial flags packed and reception tables trundled, the work begins to more quietly instill a sense of wonder and respect for the complexity of our nature and what we can effect; acknowledging the coarse, shrill manipulations of our lesser instincts may inspire the more difficult, and benevolent, achievements of a shared humanity.

The Council on Library and Information Resources (CLIR) today issued a call for proposals (CFP) for its “Pocket Burgundy” publication series. The series invites proposals

The Council on Library and Information Resources is delighted to announce that we have opened registration for our in-person conferences happening in Baltimore, Maryland this

CLIR is pleased to announce the appointment of the editorial review and selection committee for year two of its Pocket Burgundy publication opportunity: Lotus Norton-Wisla,