I recently returned from a two-week expedition to the Arctic as part of the ClimateForce 2019 Team. This team consisted of 87 people from 25 countries who are all united in their commitment to combat climate change. The expedition was led by Sir Robert Swan, the first person to walk to both poles, and his son Barney Swan, the first person to walk to the South Pole using only renewable energy. ClimateForce is a seven-year initiative, founded by Barney Swan, to reduce 360 million tons of CO2 from the atmosphere by 2025.

The expedition brought our group together amidst the backdrop of the stunning Arctic to explore solutions to climate change and help create a global coalition of climate and sustainability leaders. The Arctic is one of the places most impacted by climate change: this region has seen a 3.5° F temperature increase in the last 40 years, compared to 1.4° F globally. Having discussions and attending presentations about climate change with a view of melting glaciers in the background imposes a sense of urgency to finding solutions that is not attained in any other space.

Many of the places we visited would not have been accessible at this time of year as recently as 30 years ago. A 30-year veteran of National Geographic Expeditions to this region told us how unusual it was to not have pack ice as far north as we traveled—we made it to 79.5°N, about 600 miles from the North Pole. Sitting in a kayak amongst melting icebergs, the vulnerability of the Arctic to even slight increases in temperature becomes tangible. The surreal beauty and fragility of this place is something I will never forget. 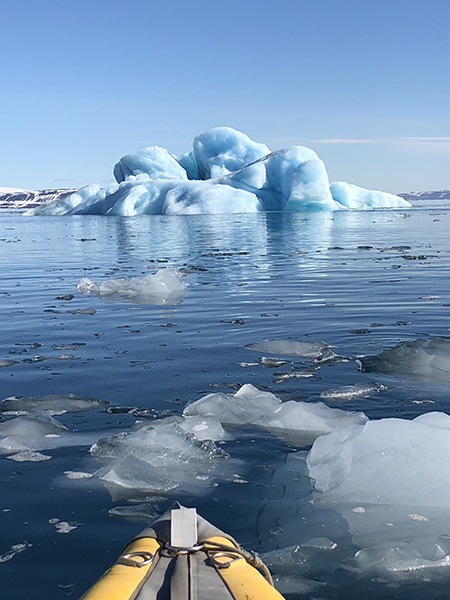 The ClimateForce team had people from varying professions, including industry, banking, non-profits, government, and academia. Though there were many students in the expedition team, the University of Texas at Austin was the only official university cohort on board. My colleague Joshua Rhodes and I were selected as part of the UT group because of our research on ways to decarbonize the energy system to fight climate change. We both gave presentations as part of the expedition program to teach the other participants about some of the challenges to reducing greenhouse gas emissions associated with energy and how our research helps to develop solutions.

A recurring theme of many of the presentations and discussions on the ship—and something that I am constantly thinking about in my own research—is the crucial role of carbon dioxide removal technologies to combat climate change. Carbon dioxide is a cumulative problem. This means that the total amount that has been emitted and not the rate at which it is being emitted is what determines the extent of temperature rise and other climate change impacts. Even if we were to completely stop releasing CO2 into the atmosphere ten years from now—or tomorrow—we are still going to see climate impacts because of the amount of carbon dioxide that is already in the atmosphere. That is why carbon dioxide removal technologies are a crucial part of decarbonization strategies.

The easiest carbon dioxide removal technology is forestation, aka planting trees. Trees are really good at pulling CO2 out of the air and storing it. A recent article published in the journal Science estimates the huge potential that planting trees could have in solving climate change. Other carbon removal technologies include carbon capture and storage (CCS), bioenergy with carbon capture and storage (BECCS) and direct air capture (DAC).

In CCS, carbon dioxide is captured from the exhaust of large power plants and is then piped and injected into geological formations underground where it can be permanently stored. Other researchers are experimenting with carbon utilization technologies (CCUS), where instead of storing the captured exhaust CO2 it would be transformed into useful products. In BECCS, CCS technology is paired with a bioenergy plant—one that uses trees or crop wastes instead of fossil fuels—to result in an overall negative emissions process. Because growing plants sequester CO2, bioenergy is typically considered to be carbon neutral. When the carbon dioxide released at bioenergy plants is subsequently captured, the overall process becomes carbon negative. In DAC, CO2 is removed directly from the air and can then be stored or used through the same technologies of CCS and CCUS. Some DAC test facilities are already in place around the world. But these technologies will struggle to be implemented on the level that is necessary without some kind of price on carbon.

Other solutions involve ways of pairing energy use with energy production from clean sources, like wind and solar. These types of solutions are called Demand Response Programs. One example of an implementation of this type of program would be the use of a programmable thermostat that the utility can adjust when demand is very high. Another example is a conscious consumer who chooses to only run their dishwasher when they know that fleet emissions are low. Some neat tools exist to enable consumers to actively participate in these solutions. And as the Internet-of-Things continues to expand, opportunities for these types of programs grows with it.

However, this type of direct management by the utility of consumer appliances, or even automatic response of connected appliances to signals from the grid, requires extensive amounts of data and data sharing. There are significant and legitimate concerns related to privacy as well as data management, formatting, and networking. In my CLIR work in data curation for energy economics, I am constantly struck by not only the volume of energy data that is currently available but also the possibility of potential energy data for these uses as well as the related challenges of access and privacy. How to balance these concerns with the necessity of these solutions will be an important consideration going forward.

Emily Beagle is a CLIR Postdoctoral Fellow in Data Curation for Energy Economics at the University of Texas at Austin.

This is the third in a series of posts examining climate disruption and its implications for the work of professionals in the information and cultural heritage community.

To Be Part of the Climate Solution, We Must Center Communities, by Nicole Kang Ferraiolo and Jodi Reeves Eyre, August 14, 2019

CLIR’s Mission in the Era of Climate Disruption, by Charles Henry, August 9, 2019

CLIR today announced the appointment of Stacey Patton as communications manager. Patton is an award-winning journalist and author who teaches digital journalism in the Cathy

PrevPreviousTo Be Part of the Climate Solution, We Must Center Communities
NextCLIR Report Examines Impact of Cataloging Hidden Special Collections and Archives ProgramNext