4.1 Tests on compatibility and reproduction quality

4.2 Printing out from digitized storage onto film (image)

4.3 Should filming or digitizing come first?

4.1 Tests on compatibility and reproduction quality

The working group conducted an experiment to reach conclusions about the compatibility between digital and analog conversion forms. We used for this purpose a test chart in Format din A2 with standard test indications for resolution (reproduction sharpness), reproduction of gray scale, and color reproduction. Further, samples of different printed text and handwriting, together with black-and-white and color photographs, were mounted on the test chart. The chart was filmed in black and white and in color on different microfilm material (35mm) and directly digitized, using different scanners, bitonally, in gray scale, and in color. Working paper copies were made of the film and of the digitized conversion formats. The results of the test chart were digitized with different film scanners. As a further step, transfer was made from film to microfiche. Finally, the digitized image data from the test chart was exposed by com systems on microfilm. The analog test patterns were then evaluated microscopically, according to the appropriate standards, and the digital formats were evaluated with assistance of a high resolution color monitor and the zoom function with image-reading software.

The experiment (Figure 2) revealed that digital systems do not yet achieve the high resolution of microfilm (Test group 12.5, 11, or 8). The higher score of 8 on the Quality Index is achieved only by microfilm. Medium quality was achieved by digitization from the original in gray scale. Transfers from microfilm, and in part also from the original, onto microfiche and into digital conversion forms retain readability. Working copies on paper (printouts from reader-printers and laser printers) are at a similar level. A four-color print from a digitized original is the only example to reach the test indication group 4.5. In this case, digitization of the test chart and its color microfilm copies was done with a drum scanner. The result showed what is technically feasible if cost is not a consideration.

The differences between the half-tone reproductions were so obvious that a subjective judgement was all that was needed. Because of its wide exposure scope, the microfilm was able to reproduce all elements present in the test chart to an appropriate level of quality. The digital conversion required more exposures with different parameters in order to present these elements correctly in different images. Thus, film digitizing produced better results, since the contrast of the material in microfilming was already somewhat enhanced and generally evened out.

These are the results of an experiment with a relatively large test chart, corresponding roughly to the size of a sheet of newspaper or an open large folio book. Better results can be expected from material of smaller size, assuming that the relationships remain the same.

It is essential to stress that a lower quality must be expected from digitization of film, as compared with the high-value digitization from the original with gray scale. On the other hand, the quality of the film used in this experiment was so superior that it would be adequate if the digitizing systems were to be further developed and digitizing with higher resolution were to be financially more viable. In the case of less resource-intensive bitonal digitization, the results of digitizing from film and from the original were similar. 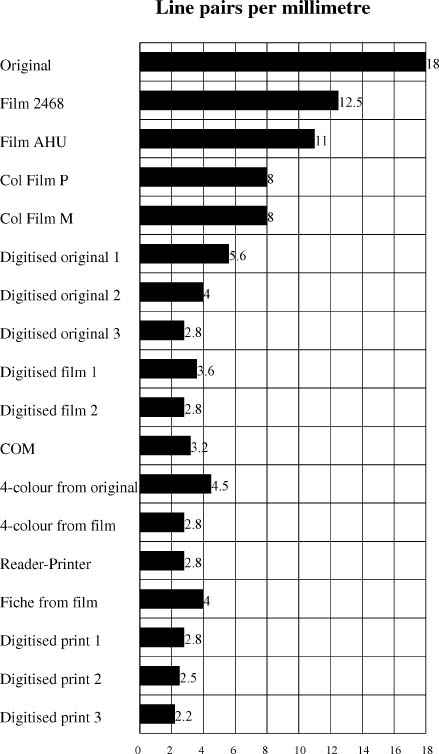 4.2 Printing out from digitized storage onto film (image)

It proved difficult to find a company able to print out onto microfilm a tiff data file of the digitized test surface. Printout of image data, in particular of material in the din A2 format, does not yet seem to be among the normal services of Computer Output Microfilm (com) companies. We finally succeeded, thanks to one firm that had installed special equipment for work in gray scale and reproduction of detail for work on industrial technical drawings and black-and-white photographs.

The test material could be reduced 72-fold in full, and 36-fold and 18-fold only in part. Since the pixel number of the equipment was about 3200 ? 2600, the smallest reduction (18-fold), which could only reproduce parts of the image, gave a resolution value of 3.2 on the iso test scale, which more or less guaranteed readability.

A further exposure was done by a foreign firm, which managed to print out the whole of the test surface onto microfilm (35 mm). However, the reproduction quality, with a resolution level of 1.8, was very low, partly because a film with low-resolution capacity had been used instead of microfilm.

All that was available for this experiment was a digitized image data file in bitonal mode. Also, the detailed material proved too large in din A2 for current technical capacities. Both points mean that further experiments are necessary before any general verdict can be reached on the quality of the printout of digital image data onto microfilm, as well as on its availability and financial viability. The obvious prerequisites for digitizing for an optimal com printout of image data must be included in these experiments. There is as yet no way we can speak of compatibility of analog and digital media in the direction digital-to-analog. Full compatibility would be achieved if the directly filmed microfilm and the film produced through the digital interim carrier were of comparable reproduction quality and if the image data produced by digitizing the microfilm were identical with that used to produce the film via com (see paragraph 3.1). Current experiences with optical systems shed doubt on whether such “film-to-film” compatibility can ever be achieved.2

4.3 Should filming or digitizing come first?

Printout onto microfilm of image data of archive and library material is obviously not yet generally available. The level of reproduction quality that can currently be achieved does not allow for further digitization through com microfilm. For both these reasons, we cannot yet recommend digitizing from the original, followed by digitization of a film as an age-resistant storage medium. Again, we would advise producing a microfilm that meets the requirements we have described and then digitizing from that according to the intended use.