This summary was written by Kathlin Smith

Go to a public library, the Web, or a good bookstore and you’ll be able to find a copy of Upton Sinclair’s seminal 1906 work The Jungle, along with many other books by American authors from the early twentieth century. Gaining access to the Sousa Band’s recordings of “Stars and Stripes Forever,” or other important sound recordings from the early twentieth century, is far more difficult.

Survey of Reissues of U.S. Recordings finds that most U.S. historical sound recordings have become virtually inaccessible-available neither commercially nor in the public domain. According to the report, the rights to 84 percent of historically significant recordings made in the United States between 1890 and 1964 are still owned by someone and are therefore protected by law. For most pre-1972 recordings, protection comes in the form of state, not federal, law until 2067. Because recordings cannot be copied and distributed without permission of their rights holders, the only legal way to obtain a CD of a pre-1972 recording is through a reissue. Yet the study found that rights holders have reissued-or allowed others to reissue-on CD only 14 percent of the pre-1965 recordings they control. Thus, most historically important sound recordings are available for hearing only through private collectors or at research libraries that collect our audio heritage and have the equipment to play obsolete, often-frail recordings. 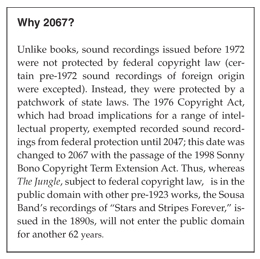 The study was conducted by historian and media research executive Tim Brooks, with the assistance of Steven Smolian. It analyzed a sample of 1,500 published recordings commercially released in the United States between 1890 and 1964 in seven genres: jazz/ragtime, blues/gospel, country, ethnic, pop/rock, classical, and other. The study’s time span was broken into 15 five-year periods. To ensure that the study was restricted to recordings for which there is documented historic interest, Brooks and Smolian selected their sample from 20 modern discographical sources representing the seven genres. Two rounds of sampling were done. The aim of the first round was to estimate the proportion of all recordings for the study period that are protected. The purpose of the second round was to identify 1,500 protected recordings and to determine the proportion of such recordings that is currently available in reissue and the sources of those reissues.

Concern about the preservation and future accessibility of our country’s recorded-sound heritage led the U.S. Congress to enact the National Recording Preservation Act of 2000 and to create the National Recording Preservation Board under the aegis of LC. Congress directed the board to examine access to historical recordings, including the role of archives and the effects of copyright law on access to recordings. This study, in responding to that charge, challenges some policy assumptions-for example, that once a work is in the public domain, no one will want to preserve it, and that prolonged periods of protection will give owners an incentive to keep a work commercially accessible. As this study shows, most pre-1965 recordings have not been reissued for public sale by their owners. Many will remain inacccessible-and in an uncertain state of preservation-for two more generations.

More About this Report

Commissioned for and sponsored by the National Recording Preservation Board, Library of Congress. Copublished by CLIR and the Library of Congress. The text of the report is available free on CLIR’s Web site at https://www.clir.org/pubs/reports/pub133. Print copies can be ordered at this URL for $20 per copy plus shipping.