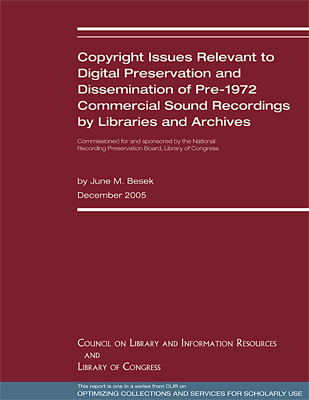 Commissioned for and sponsored by the National Recording Preservation Board, Library of Congress

Copublished by the Council on Library and Information Resources and the Library of Congress.

Copyright © 2005 June M. Besek, Kernochan Center for Law, Media and the Arts, Columbia Law School. Many thanks to Robert Clarida, Jane Ginsburg, Fred Koenigsberg and Eric Schwartz for their helpful comments and suggestions on drafts of this report. Research assistance from Zainab Ahmad, Tom Paskowitz, Rupa Rao, Mark Rasmussen and Maria Termini, all members of the Columbia Law School class of 2005, is gratefully acknowledged.

2.3 Rights under Copyright
2.4 Privileges and Exceptions

4.4 Fair Use and Equitable Doctrines

June M. Besek is executive director of the Kernochan Center for Law, Media and the Arts at Columbia Law School, where she conducts research on copyright law, particularly as it relates to new technologies. She also teaches seminars on Authors, Artists and Performers and on Advanced Topics in Copyright. She is the author of many articles on copyright law issues. Ms. Besek serves as a consultant to the Library of Congress in connection with the National Digital Information Infrastructure and Preservation Program (NDIIPP) initiative, and as a member of the Section 108 Study Group, convened by the Library of Congress to reexamine existing library privileges under the Copyright Act and consider what amendments may be appropriate in light of the changes wrought by digital media. Ms. Besek holds a law degree from New York University School of Law and a B.A. in economics from Yale University.

Enactment of the National Recording Preservation Act of 2000 came at an auspicious time for the Library of Congress and other sound recording archives and libraries. The U.S. Congress recognized that preservation responsibilities of institutions holding audio collections were increasing as collections grew, and that authoritative information was required by archives to assure the survival of their collections. When Congress created the National Recording Preservation Board in this law, it charged the Board with conducting a study of the state of audio preservation in the United States. The law also directed the Library of Congress to create a comprehensive national plan for audio preservation. The findings of this study will inform that preservation plan.

The preservation study, of which this publication is the second installment, is examining a range of issues identified by Congress in the Recording Preservation legislation: the emergence of standards for digital preservation; guidelines for reformatting at-risk recordings; U.S. copyright laws that affect audio preservation; and how scholars and the public might access historical recordings legally.

Congress specifically mandated that the study examine “copyright and other laws applicable to the preservation of sound recordings.” Presently, the relation of federal copyright law to recorded sound is receiving a great deal of attention. Laws are scrutinized, challenged, and revised in response to the ease with which digital recordings can be duplicated. Yet, sound recordings produced in the United States prior to 1972-over 80 years of recorded sound history-are not protected by federal copyright law. Rather, they are protected by a combination of state copyright laws and federal laws that govern the musical or other works performed on the recordings.

June Besek’s study lucidly summarizes how audio preservation is affected by state and other laws. A number of laws impact how we may preserve recordings and what we may do with the copies we create. This work examines these laws within the context of preservation and provides an analysis that will be useful to the legal community as well as to archivists.

The laws governing sound recordings made before 1972 are not simple and, as this study implies, some may in fact impede effective preservation. Without this work we would not be aware of the challenges implicit in the laws and understand their full impact. This report will be of great value in creating a national preservation plan. We are grateful to Congress for supporting this significant work and to June Besek for bringing light and clarity to a complex topic.

Since the beginning of commercial sound recording in the 1890s, Americans have been enthusiastic creators and prolific consumers of recordings. Almost every form of sound has been captured-from musical performances and whale songs to political addresses and oral histories. Entrepreneurs of the late nineteenth century created a consumer market for recordings, and the commercial sector has played a significant role in the growth of the recording industry and the innovation of recording technologies. Despite the popularity of sound, however, federal copyright was not extended to sound recordings until 1972. State laws protect all recordings produced before that date.

It is those state laws that libraries and archives must follow when making decisions about copying their fragile historical recordings in order to preserve them. Sophisticated tools for rerecording offer a means to copy fragile wax cylinders or lacquer discs once and forever. As a result, many libraries today can retire original copies from use and, at the same time, broaden access to these valued materials through the use of digital surrogates. But do these laws allow them to do that?

This report by June Besek addresses the question of what libraries and archives are legally empowered to do to preserve and make accessible for research their holdings of pre-1972 commercial recordings, the large aural legacy that is not protected by federal copyright. The report is one of a series of studies undertaken by the National Recording Preservation Board, under the auspices of the Library of Congress, to “maintain and preserve sound recordings that are culturally, historically, or aesthetically significant,” as directed by Congress in the National Recording Preservation Act of 2000 [Public Law 106-474]. The act specifically requires the conduct of a study of “[c]urrent laws and restrictions regarding the use of archives of sound recordings, including recommendations for changes in such laws and restrictions to enable the Library of Congress and other nonprofit institutions in the field of sound recording preservation to make their collections available to researchers in a digital format” and of “[c]opyright and other laws applicable to the preservation of sound recordings.” Ms. Besek’s study, together with a forthcoming second study, which will focus on the rights associated with unpublished recordings, will provide essential information to the Library of Congress when it develops its national plan for preserving sound recordings, as the law provides.

As the first in-depth analysis by a nationally known expert in copyright law, this report will also be a timely and authoritative aid to the many librarians and archivists who face decisions daily about how to establish priorities for sound preservation. This report not only provides clear evidence of the need for updating copyright law to take advantage of digital technologies to preserve and to make accessible the full range of our sound heritage, but also demonstrates what preserving institutions can do to ensure access to our past aural landscape into the future.

Abby Smith
Consultant to the Council on Library and Information Resources