No Brief Candle: Reconceiving Research Libraries for the 21st Century 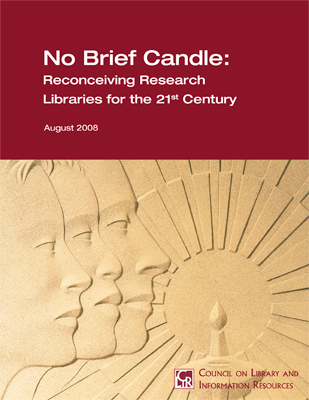 Life is no brief candle to me. It is a sort of splendid torch which I have got a hold of for the moment, and I want to make it burn as brightly as possible before handing it onto future generations.
-George Bernard Shaw

Part I: A Continuing Discussion on Research Libraries in the 21st Century

Introduction
Prologue to a Fundamental Rethinking: Context and Topic Threads
Reconceiving the Library: A Vision for the 21st Century
Challenges and Constraints
Recommendations

The Research Library in the 21st Century: Collecting, Preserving, and Making Accessible Resources for Scholarship, by Abby Smith

The Future of the Library in the Research University, by Paul N. Courant

Co-teaching: The Library and Me, by Stephen G. Nichols

The Role of the Library in 21st Century Scholarly Publishing, by Kate Wittenberg

A New Value Equation Challenge: The Emergence of eResearch and Roles for Research Libraries, by Richard E. Luce

Accelerating Learning and Discovery: Refining the Role of Academic Librarians, by Andrew Dillon

Groundskeepers, Gatekeepers, and Guides: How to Change Faculty Perceptions of Librarians and Ensure the Future of the Research Library, by Daphnée Rentfrow

Leveraging Digital Technologies in Service to Culture and Society: The Role of Libraries as Collaborators, by Lee L. Zia

This new title from CLIR, No Brief Candle: Reconceiving the Research Library for the 21st Century, is composed of a series of provocative essays, the proceedings of a lively and informed symposium earlier this year in Washington, and a set of recommendations extrapolated from both. While several of the subject headings are familiar-scholarly communication, peer review, preservation of data, and e-science-the conclusions and recommendations are not. The consensus derived from these efforts was unambiguous in calling for more aggressive intervention to better structure and manage the challenges we face.

This report demands change. Common themes include collaboration between librarians, faculty, and information technology experts to articulate strategies and tactical approaches to a rapidly changing environment. This represents a broad research agenda that cannot be executed by a single profession. We are asked collectively to rethink current hiring practices, to provide for new career paths and opportunities for professional development, and to consider redefining libraries as multi-institutional entities. The latter entails a mandate to eliminate redundancy by calibrating resources, staff, and infrastructure functions to the collective enterprise of the federated institutions. This transcends the traditional concept of a library (and by extension a university or college) while preserving the programmatic strengths and mission of the individual schools, and in fact should enhance intellectual productivity in a far more cost-effective fashion.

As the title of this report suggests, this is not a passing phase in higher education. It is a transformational period that requires innovation and risk. I sincerely hope this publication will engender further discussion, new ideas, and collaborative efforts that respect our traditions while recognizing the urgency for invigorated leadership and new direction.

Suzanne Lodato, Director, Division of Preservation and Access National Endowment for the Humanities