Our Relationship with Internet Search Engines

We invite you to check out our blog series, “Re: Thinking.” The weekly blog features perspectives from a variety of contributors on topics relating to the emerging digital environment, research, and higher education. In this week’s blog, “When Less is More,” CLIR President Charles Henry discusses what higher education institutions can learn from “thinking in systems.”

CLIR Issues is produced in electronic format only. To receive the newsletter electronically, please sign up at https://www.clir.org/pubs/issues/signup.html. Content is not copyrighted and can be freely distributed.

While humanities departments in colleges and universities nationwide face declines in funding, program offerings, and tenure-track faculty positions, opportunities for advancing the humanities are now greater than ever, asserts the author of a new paper published by CLIR. “Creating Value and Impact in the Digital Age Through Translational Humanities,” written by Abby Smith Rumsey, director of the Scholarly Communication Institute, is the latest in CLIR’s Ruminations series.

The study of human thought, creativity, and history is expanding, Rumsey writes, because the boundaries between expert and nonspecialist audiences are eroding. Content is available to more people; new tools allow scholars and the public to interact with the substance of human inquiry in novel ways; and the previously distinct roles of creation, curation, and consumption are blurring. To illustrate her point she cites, among other examples, the creative work of artist David Hockney and interactive game designer Mary Flanagan; the access afforded through the Digital Public Library of America, Internet Archive, and Flickr; crowdsourced curation sites such as What’s On the Menu? and Oxford University’s Great War Archive; and the system of distributed preservation used by the Digital Preservation Network.

These developments are creating “an engaged community of humanists practicing translational humanities—the application of humanities expertise in domains beyond higher education and cultural heritage institutions.”

“Translational humanities requires no dilution of expertise—on the contrary,” she notes, “but the ways expertise works in a complex environment differ from the ways it works in the academic world.” She argues that society today has a great demand for many types of experts trained in the humanities, ranging from historians and ethicists to specialists in media, foreign languages, and literature. “The need for such experts is greater outside the academic world than inside, and the current oversupply of such expertise in the academic world provides an extraordinary opportunity to move that expertise into the world where it is sorely needed—to infiltrate the spheres of government, business, media, and entertainment with humanities expertise in critical thinking about context, complexity, and contingency.”

How do we encourage the growth of translational humanities? A first step is to forge paths that employ humanities expertise in areas other than tenure-track professoriate to “advance scholarship and the public good at the same time.” One such path is alternative academic (alt-ac) careers, where graduates in the humanities work collaboratively with staff in libraries or laboratories. Rumsey also cites development of the Praxis Network, a group of allied programs that provide disciplinary training while also equipping students to serve in humanities roles outside the professoriate.

Some scholarly societies and humanities centers are creating programs to address the translation of their disciplinary subjects and discourse to broader publics. The Scholarly Communication Institute, for example, is sponsoring a partnership between the Consortium of Humanities Center and Institutes and centerNet to create pilot projects that feature non–tenure-track work.

While focusing much of her paper on how the Web can leverage contributions of nonmonetary resources—time and attention—the author cautions that open-access culture is not free. “Reliable long-term funding is indispensible to building and maintaining a public good such as the vigorous presence of humanities on the Web.” Many cultural institutions need funds for purposes that are not simply operational, but that will permit them to make the transition to the digital era. “By nature, organizations dedicated primarily to a public mission will never be fully self-sustaining in the market economy. However, they can make themselves less vulnerable to budgetary contractions… by becoming more open and accessible, as well as by feeding the growing demand for humanities online and thus strengthening their bonds with Web communities and constituents.” In the end, expanding participation will expand and strengthen the resource base for the humanities.

Our Relationship with Internet Search Engines

By Kenning Arlitsch and Patrick O’Brien

Forget about your existing users for a moment; they’re not important to this conversation. If you think your websites and repositories already get a good amount of use then you may not grasp the potential for increased traffic. Your existing online audience is a tiny fraction of the users you could have if they were certain that what they seek exists at your sites. The targets of this conversation are the customers of commercial search engines who submit more than 17 billion search queries per month in America alone,1 and your resources don’t exist for those customers if they can’t find them in search engines. Furthermore, these search engine customers will not be yours until search engines find your sites worthy of referral to their customers. Do we have your attention?

Forgive the hyperbole. Libraries want to reach both existing and potential users, of course, but increasingly the emphasis on assessment demands that we demonstrate use and return on investment. A recent Pew Research Center report estimates that 81% of U.S. adults, and 95% of U.S. teens (about 200 million people) use the Internet.2 Google handles more than three billion of their searches every day, and Google controls “only” 66% of the domestic search engine market share. Internet users have developed deep and trusting relationships with search engines and have made them the world’s discovery layer. Most library discovery layers in contrast draw little traffic and most of them provide little useful metadata for search engines.

Libraries are generally not very good at optimizing for web search, and that’s because search engine optimization (SEO) is too often left as an afterthought of digital library development. Optimizing a library’s web presence only works when it’s approached holistically and driven strategically, and few if any libraries are currently approaching SEO this way. We’re not just talking about tweaking your webserver configuration, or improving metadata in your digital collections, or using the right keywords in the text of your websites. We’re not talking about gaming search engines, either. We’re talking about an entirely new approach to our relationship with search engines. It’s an approach that understands them to be advocates for their customers, and understands the products and services that they want to deliver to those customers.

Over the next year we’ll be issuing a series of blogs and articles through CLIR designed to explain this relationship and how to address it holistically. We’ll discuss organizing web-based information around specific audiences, focusing on high value activities, the various phases of SEO, and the detail of what needs to be done. We’ll write about broad-stroke issues like internal and external customers, and our funding sources and what kind of ROI they’re looking for. We’ll get into detail about setting baselines, addressing information architecture, implementing semantic web practices, using social media effectively, and making sure that analytics are set up correctly so that we can track users as they jump across our various websites and repositories.

A recent excellent Re:Thinking blog post by Jon Butler, titled “Differentiation,” predicted some possible futures for the Digital Public Library of America. An inspiring effort, the DPLA could become an enormously rich information resource for the public as well as academia. But the likelihood of the approximately 200 million US Internet users visiting the DPLA directly is small. A much greater opportunity lies in ensuring that search engine customers are referred to items in DPLA, but that will only happen if DPLA puts serious consideration into organizational strategies that leverage search engine optimization and semantic web techniques. It’s much easier and more effective to align the organization with these concepts right from the beginning. Without a strategic framework, libraries run the risk of implementing the latest SEO and semantic web fads as disjointed afterthoughts that lack an objective valuation model that stakeholders understand and trust.

We look forward to the conversation that we hope these blog posts and articles will inspire.

After more than two years of planning, the Digital Public Library of America (DPLA) launched its discovery portal and open platform April 18. The website, at dp.la, links the public with millions of items from the collections of libraries, archives, museums, and cultural heritage institutions.

“Far more than a search engine, the portal provides innovative ways to search and scan through its united collection of distributed resources,” notes a DPLA update issued on launch day. “Special features include a dynamic map, a timeline that allows users to visually browse by year or decade, and an app library that provides access to applications and tools created by external developers using DPLA’s open data.”

The website features a number of virtual exhibitions on topics in US history. For example, America’s Great Depression and Roosevelt’s New Deal allows visitors to explore, through photos and narrative, themes such as “What happened?,” “Relief Programs,” and “The New Deal’s Legacy.”

On April 16, the DPLA announced formation of a new committee structure. CLIR President Charles Henry has been appointed to the Advisory Committee. Digital Library Federation Program Director Rachel Frick has been appointed co-chair, with Emily Gore, of the Content Strategy Committee, on which CLIR Program Officer Jena Winberry will also serve. Both Henry and Frick have been involved in planning for the last 30 months—Henry serving on the DPLA Steering Committee and Frick serving as cochair of the Content and Scope Working Group.

The DPLA launch celebration planned for April 18-19 was postponed in light of the Boston tragedy and is being rescheduled for fall 2013. 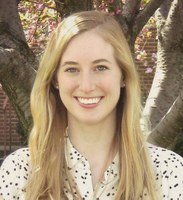 Kelly Knight, a library science student at The Catholic University of America in Washington, DC, has been selected to receive this year’s Rovelstad Scholarship in International Librarianship.

Knight received a bachelor’s degree in business administration from the University of Mary Washington, Fredericksburg, Virginia. “I became interested in a career in libraries thanks to being placed as a student reference aide at my undergraduate library,” said Knight.

After graduation, she worked as a library assistant for the Logistics Management Institute in McLean, Virginia, before assuming her current position as reference specialist at George Washington University’s Himmelfarb Health Sciences Library. Knight is interested in developing and leading education programs related to resources and strategies that support social entrepreneurship.

The Rovelstad Scholarship provides travel funds for a student of library and information science to attend the annual meeting of the World Library and Information Congress, which takes place in Singapore in August this year.

Looking for a job? Want to post a job? CLIR offers Job Connect, a free job-posting space at http://connect.clir.org/Home/. If you want to post a position and are already a CLIR Connect user, just sign in with your username and password. If you are new to CLIR Connect, it takes only a minute to create an account and sign in. (Note that job postings are moderated, so they will not appear instantaneously.)