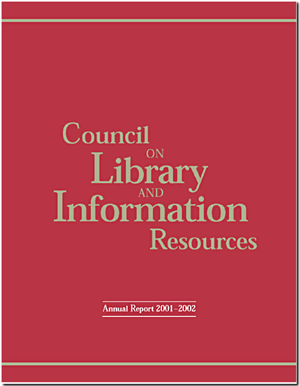 Acknowledgments
Letter from the Chairman
Message From the President
The Programs:
Publications
Advisory Groups
Grants and Contracts
Financial Statements

Stanley A. Chodorow
University of California

Deanna B. Marcum
Council on Library and Information Resources

The Council on Library and Information Resources(CLIR) grew out of the 1997 merger of the Commission on Preservation and Access (CPA) and the Council on Library Resources (CLR). Over the years, CPA and CLR, in partnership with libraries, archives, and other information providers, advocated collaborative approaches to preserving the nation’s intellectual heritage and strengthening the many components of its information system. CLIR was founded to continue this tradition of support for a national information system and a seamless web of information resources, of which all libraries and archives are a part.

The convening role is central to CLIR’s mission. CLIR brings together experts from around the country and around the world and asks them to turn their intelligence to the problems that libraries, archives, and information organizations face as they integrate digital resources and services into their well-established print-based environments.

CLIR urges individuals to look beyond the immediate challenges and imagine the most desirable outcomes for the users of libraries and archivesto be rigorously practical and to dream.