Survey of the State of Audio Collections in Academic Libraries 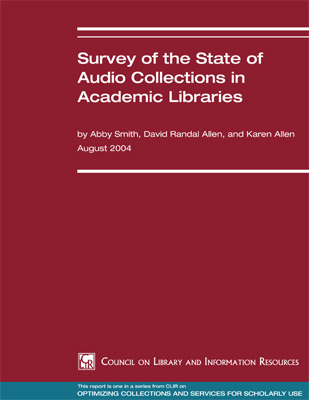 Introduction
Scope, Design, and Methodology of the Survey
Summary of Findings
Conclusions

Abby Smith is director of programs at CLIR. She is responsible for developing and managing collaborative programs with key library and archival institutions to ensure long-term access to our cultural and scholarly heritage. Before joining CLIR in 1997, she had worked at the Library of Congress for nine years, first as a consultant to the special collections divisions, then as coordinator of several cultural and academic programs in the offices of the Librarian of Congress and the Associate Librarian for Library Services. She is the author or coauthor of several CLIR publications, including Access in the Future Tense, New Model Scholarship: How Will it Survive?, and Folk Heritage Collections in Crisis.

David Randal Allen has worked with audio, video, and digital technologies to store and transmit radio and television news programming since the late 1960s. For most of the last 30 years, Mr. Allen has worked as a news producer and reporter (assigned to cover Capitol Hill, the State Department, and the White House). He has also been an editor, news director, and managing editor for wire services, television, and radio news operations including the Associated Press, NBC Radio Network, and Standard News. He is currently vice president of The Communications Office, Inc., a consultancy providing communication services for information, library, and a variety of corporate and non-profit clients. Mr. Allen served two terms as secretary of the National Press Club.

Karen Allen began her career at CBS Television Network in Washington, DC, in the early 1970s and worked as a television producer for a WWL-TV, New Orleans, through the 1980s. Ms. Allen shifted to public affairs, taught at Tulane University, and returned to Washington, DC, to work for natural history and conservation organizations. In 1995, she founded The Communications Office, Inc. As company president, she has directed projects concerning communication issues for organizations including The Smithsonian Institution, the Library of Congress, the Congressional Research Service, the Council on Library and Information Resources, and the National Archives. Ms. Allen is on the board of the Institute for Learning Innovation and is an advisor to Disney’s Animal Kingdom.

The authors would like to express their appreciation to the many people who helped make this survey report possible.

First, we thank the respondents themselves. Even before the survey process began, we realized that completing the lengthy questionnaire would be a time-consuming process. The library directors and others charged with responding would need to communicate with numerous units inside their own institutions to gather basic information. We are grateful to these leaders for making participation in our study a priority for their institutions. We also thank the librarians, special collections managers, archivists, audio specialists, catalogers, preservationists, and others who were responsible for reporting on their collections. The collective answers have revealed both the uniqueness of library collections and the shared challenges of preserving them.

Perhaps the only task more challenging than responding to this survey was helping develop the tool and interpreting its findings. For this reason, we are also grateful to the experts who served as our advisory group. With patience and good humor, they shared with us their knowledge, their wisdom, and their passion for the aural culture held in libraries and archives.