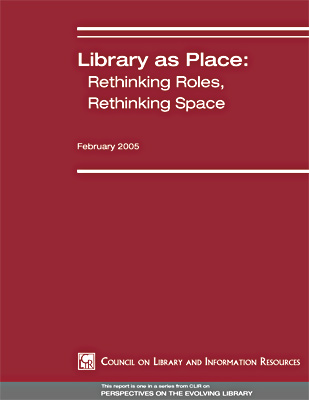 Copyright 2005 in compilation by the Council on Library and Information Resources.

The Library as Place: Changes in Learning Patterns, Collections, Technology, and Use
by Geoffrey T. Freeman

Righting the Balance
by Scott Bennett

From the Ashes of Alexandria: What’s Happening in the College Library?
by Sam Demas

The Ultimate Internet Café: Reflections of a Practicing Digital Humanist about Designing a Future for the Research Library in the Digital Age
by Bernard Frischer

Scott Bennett is Yale University librarian emeritus. He has had extensive experience with library planning, construction, renovation, and restoration at Yale and in his service as the Sheridan Director of the Milton S. Eisenhower Library at Johns Hopkins University and as assistant university librarian for collection management at Northwestern University. As one of the founders of Project Muse, he fostered changes in information use that drive innovations in the use of library spaces. Bennett has served on both the library and the English department faculties of the University of Illinois at Urbana-Champaign. He is the author of the recent CLIR publication Libraries Designed for Learning. He is senior adviser for the Library Project of the Council of Independent Colleges.

Sam Demas is college librarian and senior lecturer at Carleton College. He and his staff are experimenting with the development of the liberal arts college library as both a virtual space and a vibrant place of student research, community building, and cultural events. He and his colleagues are working to define the role of the library in a residential learning community. Before coming to Carleton in 1998, Demas worked at Cornell University for 20 years in a variety of positions and libraries, including head of collection development and preservation at the A. R. Mann Library and associate director of Mann Library. His research interests at Cornell were selection for preservation, national preservation planning, and adapting the principles and practices of collection development to the electronic library.

Geoffrey T. Freeman, AIA, is a principal of Shepley Bulfinch Richardson and Abbott, a Boston-based design firm. A nationally recognized authority on library planning and design, Freeman has designed more than 80 libraries. His chief interest is in contributing to the advancement of education, to understanding how people learn, and to heightened appreciation of how architecture affects the teaching and learning processes. Freeman has taught at the secondary school level and was an instructor in the Department of Visual and Environmental Studies at Harvard College while earning his master of architecture and master in landscape architecture degrees from the Harvard University Graduate School of Design. His clients include Colby College, Brown University, Bucknell University, Emory University, the University of Southern California, Princeton University, Illinois Wesleyan University, Columbia University, Dartmouth College, Lake Forest College, Harvard University, Yale University, Rice University, and Duke University. He frequently lectures about the design of libraries for research universities and liberal arts colleges.

Bernard Frischer is director of the Institute for Advanced Technology in the Humanities, University of Virginia. From 1976 to 2004 he was professor of classics at the University of California, Los Angeles (UCLA), where he founded and directed the Cultural Virtual Reality Laboratory, chaired his department, and was director of the UCLA office of the Education Abroad Program of the University of California. In addition to his work in digital archaeology, he has been involved in fieldwork and excavation, serving as director of the Horace’s Villa Project of the American Academy in Rome (1996 to 2003) and of the Frontale di Borgorose Project (2004 to the present). Frischer earned his BA in classics from Wesleyan University and his PhD in classical philology from the University of Heidelberg. He has won many fellowships and awards, including a Michigan Junior Fellowship, the Rome Prize Fellowship in Classics from the American Academy in Rome, two Senior Fellowships from the American Council of Learned Societies, and a Senior Fellowship at the Center for Advanced Studies in the Visual Arts at the National Gallery in Washington, D.C. He is the author of four books and many articles.

Kathleen Burr Oliver, MSLS, MPH, is associate director of the Welch Library and responsible for the library’s communication and liaison programs. She also serves as a faculty member in the Johns Hopkins Division of Health Sciences Informatics. Before coming to Hopkins in 1998, Oliver managed a number of small scientific and medical libraries, including those of National Institute of Allergy and Infectious Diseases’ Rocky Mountain Laboratory, the American College of Cardiology, and American Medical Association’s Washington, D.C., office. She was a reference librarian and search analyst at the National Institutes of Health library, the library of the Pharmaceutical Manufacturers’ Association, and UCLA’s Biomedical Library. She was project director for a literature review on the cost of illness that was conducted by Georgetown University’s Public Services Laboratory, and, with funding from the National Science Foundation, developed Web resources on science topics for the public radio documentary group Soundprint. Her public health training focused on maternal and child health policy, planning, and evaluation. She holds an undergraduate degree in biology and chemistry.

Christina A. Peterson is a librarian in the Academic Services Department of the Dr. Martin Luther King Jr. Library in San José, California. Her responsibilities include coordinating distance-library services, serving as a liaison to departments in the health professions and social sciences, and delivering library outreach to faculty. During the planning process for the King Library, she co-led the User Services Team which developed all public services including reference, circulation, and the new library’s Web site. She received her BS in Natural Resources from Humboldt State University in California and her MSLIS from the Catholic University in Washington D.C.

We are still far from the day when students, researchers, and teachers can access entire research collections from their desktops. Nonetheless, a wealth of high-quality material is now accessible electronically. What does this revolutionary change mean for the creation and design of library space? What is the role of a library when it no longer needs to be a warehouse of books and when users can obtain information without setting foot in its doors? Few libraries have failed to consider these questions-whether they serve their collections electronically or physically, whether they serve the general public or more specialized academic users.

In developing this publication, CLIR sought to explore these questions from a variety of perspectives. Authors of these essays include librarians, an architect, and a professor of art history and classics. The focus is primarily on research and academic libraries, although one essay, in describing a unique merger, challenges the boundaries that have long divided academic and public libraries. Each author brings a distinctive perspective to thinking about the use and services, and the roles and future, of the library; at the same time, each underscores the central, growing importance of the library as place-or base-for teaching, learning, and research in the digital age.

The publication is intended to stimulate thinking about the role of the library in the digital age, about the potential-and the imperative-for libraries to meet new needs, and about how these needs will influence the design of physical space. It is written for librarians and others involved in library planning as well as for those who invest in libraries, such as provosts, presidents, and business officers. Its goal is not to catalog all the innovation occurring in libraries nationwide but rather to expose an array of perspectives on the future of the library and to describe how these visions are being manifest in spatial design. We hope that the essays will be useful as a foundation for discussion, questions, and new thinking.