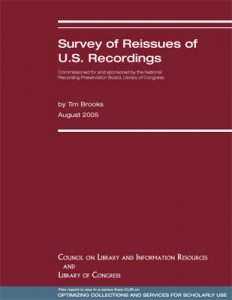 Commissioned for and sponsored by the National Recording Preservation Board, Library of Congress

Copublished by the Council on Library and Information Resources and the Library of Congress.

Summary of Key Findings and Conclusions

Appendix B. Breakdown of Survey Sample by Period and Genre

Project Director Tim Brooks is a media executive with experience in survey design and statistical sampling who has written extensively on the history of the recording industry. He is currently executive vice president of research for Lifetime cable networks. Previously, he held executive positions in research at USA Networks, NBC, and the N. W. Ayer advertising agency. He is a past chair of the Advertising Research Foundation and of the Media Rating Council, and has served on audit committees evaluating the methodologies of numerous syndicated research companies. He is an award-winning writer, having authored or coauthored numerous articles on the history of the recording industry as well as three books on the subject: Lost Sounds: Blacks and the Birth of the Recording Industry, 1890–1919 (2004); The Columbia Master Book Discography (1999); and Little Wonder Records (editor, 1999). A past president of the Association for Recorded Sound Collections, he was in 2004 honored with that organization’s Lifetime Achievement Award. He currently chairs the Association for Recorded Sound Collections’ Copyright and Fair Use Committee and is a columnist for the ARSC Journal.

Mr. Brooks conducted his study with the assistance of Project Contractor Steven Smolian. Mr. Smolian has owned and operated Smolian Sound Studios since 1960. He specializes in the restoration of obsolete audio formats. He has been a dealer in used records for 45 years and a professional appraiser of sound recordings of historical value since 1975. In 1970, he published A Handbook of Film, Theatre and Television Music on Record, 1948–1969, the first discographic work on the topics in the title. For 10 years he wrote a monthly column for The American Record Guide. He is a founding member of the Association for Recorded Sound Collections and has chaired its Dealers Committee and its Technical Committee. He has been a member of the Music Library Association since 1960 and is an active member of its Preservation Committee.

The author would like to thank the group of reissue experts who provided advice and input during the compilation of this study. These individuals include Dan Morgenstern, director of the Institute of Jazz Studies, Rutgers University; Bob Porter, author and record producer; Robert Pruter, author of Chicago Soul, Doowop: The Chicago Scene, and other books; Jack Raymond, author of Show Music on Record; and Chris Strachwitz, ethnic-record producer and owner of Arhoolie Records. We would also like to acknowledge the assistance of Sam Brylawski of the Library of Congress, and of Will Friedwald and Dick Spottswood, authorities on recording history.

Recorded sound has played an important role in the cultural, social, and political life of the United States. Recognizing this, and concerned about the preservation of and long-term access to the national sound heritage, the U.S. Congress enacted the National Recording Preservation Act of 2000 (Public Law 106-474). This law directed the National Recording Preservation Board (NRPB), under the aegis of the Library of Congress (LC), to conduct a study and issue a report on the current state of sound-recording archiving, preservation, and restoration activities and to recommend standards for access to preserved-sound recordings by researchers, educators, and other interested parties.

The legislation clearly reflects Congress’s interest in ensuring accessibility to preserved-sound recordings. Legislators were careful to specify the study of technical physical-preservation needs as well as the study of any policies and laws that may hinder access to our nation’s preserved audio heritage. (The words copyright and access are explicitly mentioned three times in the outline of what the study is to include.)

Such interest is well justified. The copyright status of historical sound recordings is unique among the creative arts in the United States. Federal law did not protect recordings until February 15, 1972. In fact, federal copyright law states that pre-1972 recordings will be protected by state and common law copyright until the year 2067. Although other copyrighted works routinely enter the public domain, this is not the case for recorded sound. With the exception of recordings of a few companies whose assets have been abandoned or donated to the public, there are virtually no public domain U.S. sound recordings. This includes many of the very first recordings, which were published as early as the 1890s. The usual allowances for copying or distributing given to older works by federal law under the orphan works clause do not and will not apply to pre-1972 recordings, further impeding public access. Because only the copyright owner can legally make old recordings available, historical recordings are at risk of physical loss as well as of passing, unnoticed, from the nation’s aural memory.

One consideration by Congress in extending copyright protection to owners for such a long period was to give those owners an incentive to reissue, and thereby preserve, older recordings. How successful has this incentive been over time? This report answers that question by quantifying the commercial accessibility of recordings published before 1965. Recordings, like other publications, do not usually remain in print in perpetuity. On the basis of statistical analysis, this report shows that most pre-1965 recordings have not been reissued for public sale and are accessible only to those who visit the institutions that archive historical recordings or to individuals with access to private collections. Today, pre-1965 recordings usually can be found only in large research libraries. Smaller institutions that still hold pre-1965 recordings rarely have the playback equipment needed to provide access to the recordings, and patrons of most public libraries do not have the equipment needed to listen to long-playing (LP) discs or 78­‑rpm recordings.

Because state and federal laws that give copyright protection for recorded sound are complex and can vary greatly from one jurisdiction to another, there is widespread uncertainty about what the law allows libraries and archives to do to preserve their collections. There is even greater uncertainty about how libraries can legally and cost-effectively provide offsite access to the recordings that they have preserved. Particularly for those media for which preservation can be costly and many original sources are rare, such as analog audiotape and disc, it is difficult to justify the expense of preservation without a view to near-term access. This suggests that the ability to provide access to historical recordings is essential to any long-term plan to preserve recorded sound.

This report is one of several studies that the Council on Library and Information Resources (CLIR) is undertaking on behalf of LC and the NRPB. Tim Brooks, project director, designed and supervised the study and analyzed the results. Project Contractor Steven Smolian compiled and organized the data.

The responsibility for ensuring long-term access to the sound heritage of this nation rests with many communities and organizations, public and private, technical and legal, scholarly and popular—indeed, with all who care about recorded sound. LC and the NRPB hope that this report, and those that follow, will enable those involved to work from a common pool of knowledge and expertise toward solutions that will benefit all.