Heather Wacha at the University of Wisconsin-Madison

The Library of Stains Project, also known as Labeculae Vivae, Latin for “#stainsalive,” is using multispectral imaging to gather scientific data drawn from stains found on parchment, paper, and bindings in medieval and early modern books. Supported by a CLIR Postdoctoral Fellowship Microgrant, the project evolved from our interests as CLIR Postdoctoral Fellows in Data Curation: Erin’s research interests focus on medieval medicine; Alberto researches the book in general and how to model the book as an object in the digital world; and Heather’s research addresses how the materiality of manuscripts informs the historical context and content of a book. Each of our host institutions holds a significant manuscript and/or print collection, and each of us is working on digital projects that intersect with those collections. From the outset, there was a natural confluence between our diverse interests and backgrounds, which culminated in a year-long pilot study that aims to identify a new approach for accessing and studying information concerning the material makeup and historic uses of books.

The Library of Stains project set out to provide: 1) a fixed dataset for characterized stains that are commonly found on manuscripts, 2) a sound methodology for the replication of gathering and analyzing the data, and 3) a clear explanation for how to implement and use the database as a means to further the study of medieval manuscripts and their conservation. In so doing, the Library of Stains hopes to engage both scholarly and public audiences, by providing additional tools for analyzing manuscripts vis à vis provenance, use, transmission, preservation, and materiality, and drawing attention to manuscripts traditionally pushed aside and dismissed due to their “dirty” or “stained” appearances. Exploring and studying the human experience through stains can draw a medieval person’s relationship to a manuscript closer to the present day and make us reconsider our own interactions with books today.

After completing the imaging stage of the project, which took place in November and December 2017, we began to process and analyze the imaging data. Among the early results, one case study turned out to be particularly interesting: a sixteenth-century recipe book from the University of Pennsylvania Libraries collection (Ricettario, UPenn, MS Codex 115). The documentary evidence was enticing, stating that the book was “[b]adly stained in upper inner corner of each page; this stain has caused some text on each page to become faded or obliterated. Possible mildew damage on upper inner edge of parchment cover. Dealer’s description suggests this might be due to a chemical spilled on the manuscript by an alchemist.”

After analyzing two samples of the manuscript’s text ink, an area of the parchment cover, an area of the paper folio (fol. 1r), two dark areas in the lower region of the stain, and an area in the upper region of the stain (see image), the preliminary results indicate that the dark areas in the lower region of the stain are similar to the text ink (due to damage to the text caused by the stain), while the upper sample does not correlate to the parchment, paper, or the text ink. This region of the stain warrants further investigation into possible chemical or acidic causative factors. This microgrant was for a duration of one year and is now at its conclusion. However, interested researchers will have the opportunity to pursue the questions raised in this exploratory study, or initiate new studies, as the data will be available in an open access repository.

Overall, the imaging data amounted to 327.5 GB. The TIFF files, along with their metadata and the methodological procedure, will be shared in an open access repository hosted by SIMS at UPenn Libraries. Showcase visualizations of the data associated with what we refer to as “stain stories—fragmentary narratives of a manuscript’s history based on the spectral signatures of its inks and stains—will be available through Digital Mappa software developed by Martin Foys, Department of English, University of Madison-Wisconsin. The visualizations will link the raw data from the repository and show how it can be used, following the methodology, to investigate the nature of stains on manuscripts.

The project benefited from the contributions of additional collaborators, including Fenella France, Chief Preservation Officer at the Library of Congress; Michael Toth of RB Toth and Associates; and William Christens-Barry of Equipoise Imaging, who provided the multispectral imaging equipment, as well as invaluable guidance during the imaging process and analysis at the universities of Pennsylvania, Iowa, and Wisconsin. 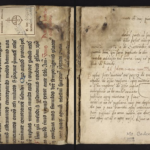