CLIR today released the first two episodes of its new podcast season exploring the impact of the climate crisis on communities and their cultural heritage. 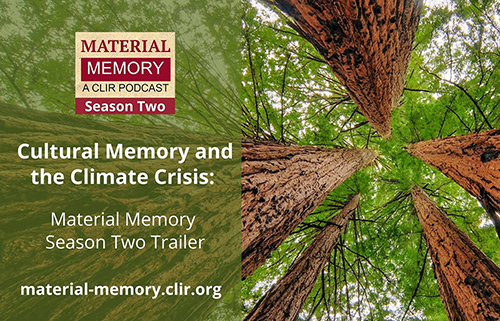 In conversations with host Nicole Kang Ferraiolo, seven guests offer perspectives from around the globe on how climate change threatens our records and traditions, the relationship between memory and disaster, and the role of cultural heritage in identity and resilience. The season will take a critical look at the role of information and cultural heritage professionals in responding to the crisis and consider how different approaches to preservation can help or harm affected communities. Watch the trailer.

“Climate change is the biggest challenge facing humanity, and many of us at CLIR have been thinking about the role of the library and cultural heritage field in responding to the crisis,” said Ferraiolo. “As the interviews unfolded, we found that the season was also about the bigger questions of what is culture, why it matters, and how cultural memory relates to issues of equity, power, and social justice.”

Episode one, “Does it Matter? Cultural Memory and the Climate Crisis,” introduces the season with perspectives from each of the guests about the effects of climate change on cultural memory and why, amidst suffering and dislocation from the climate crisis, we should care about records, traditions, and cultural heritage.

In episode two, “Archivists Against the Climate Crisis,” Ferraiolo talks with Eira Tansey, digital archivist and records manager at the University of Cincinnati Libraries, and Ben Goldman, archivist for curatorial services and strategies at the Pennsylvania State University Libraries, about their work to address the current and future impacts of climate change on archival repositories, and what archivists can bring to climate activism.

In theme-based seasons, Material Memory explores the effect of our changing world on our ability to access the record of our shared humanity, and the role that libraries, archives, museums, and other cultural institutions play in keeping cultural memory alive. Season one, released in December 2019, celebrated the UN-designated Year of Indigenous Languages. In six episodes, host Joy Banks speaks with people involved in the work of restoring audio and audiovisual recordings of indigenous languages and their extraordinary efforts to make these recordings accessible to the communities they represent.

Show notes, transcripts, and related resources for each episode are available on Material Memory’s website:  https://material-memory.clir.org/; listeners may subscribe through iTunes, Spotify, or wherever they get their podcasts.

In celebration of the season’s launch, CLIR will plant one tree for every review received through January 2021, and reviewers will be eligible to win one of two $100 gift cards for reviews submitted by December 2020.

CLIR today announced the appointment of Stacey Patton as communications manager. Patton is an award-winning journalist and author who teaches digital journalism in the Cathy