Home > CLIR Publications > CLIR Reports > Care and Handling of CDs and DVDs: A Guide for Librarians and Archivists > 3. Disc Structure

The polycarbonate substrate makes up most of the disc, including the area that is read by the laser (opposite the label side on CDs). It is present on both sides of a DVD, even a “single-sided” disc with a label on one side. This substrate provides the disc depth necessary to maintain laser focus on the metal and data layers. It also gives the disc enough strength to remain flat. Anything in or on the polycarbonate layer that interferes with the ability of the laser to focus on the data layer will result in the misreading of data. Accordingly, fingerprints, smudges, or scratches, as well as such substances as dirt, dust, solvents, and excessive moisture (which polycarbonate will absorb), can interfere with the ability of the laser to read the data. Contact of any foreign material with the polycarbonate substrate layer should be avoided.

The dye-based (R discs) and the phase-changing film layers (RW discs) both hold data by allowing or blocking light transfer through the data layer. The laser-affected (“written”) areas of the data layer absorb the “reading” laser beam as it is emitted from the laser to the metal layer and reflected back to the laser photosensor. The light and dark areas give reflectivity effects that are similar to the interference effect of the “pressed” and molded data in the metal/substrate layer in ROM discs. The reflection, whether the result of dye, film, or pressed effects, is represented digitally as ones and zeros by the firmware in the disc drive as the laser reads the disc. 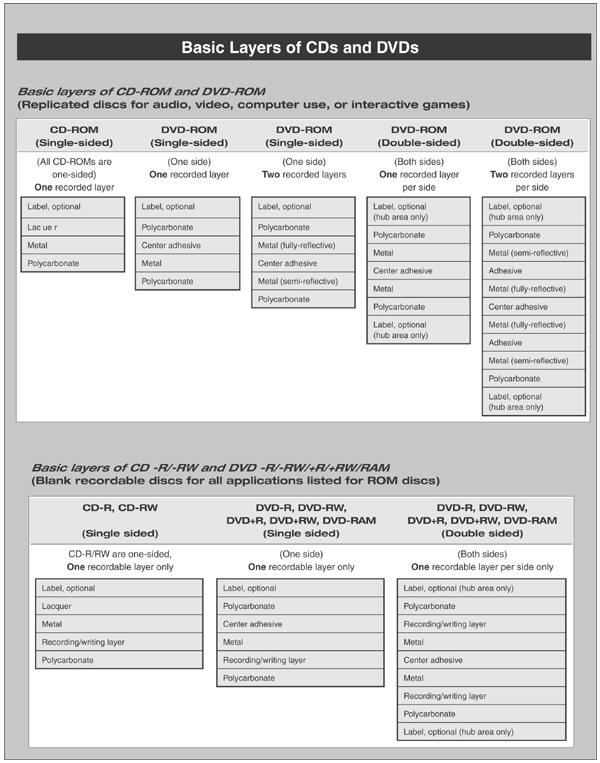 ROM discs are commercially available or made-to-order prerecorded discs, also called “replicated” discs. Examples of CD-ROMs include the Audio-CD, Video-CD, CD-i, and CD+G, as well as any number of CDs used in computer applications. Among DVD-ROMs are the DVD-Video, DVD-Audio, and any of various DVDs used in games and computer applications.

The data in CD-ROM or DVD-ROM discs are not actually in a separate layer. A molding machine uses a stamper to impress the pits (depressions) and lands (surface), which form the data, into the polycarbonate substrate surface. Metal is then sputtered or condensed onto the molded substrate to form a “reflective data layer.” The reflective metal layer in ROM discs can also be considered the data layer because the metal is integrated with the pits and lands in the polycarbonate (see Figures 2 and 3). The metal layer in ROM discs is usually aluminum. For double-sided DVD-ROM discs, the semi-reflective layer is gold, silver alloy, or silicon.

The recordable, write-once optical disc (CD-R, DVD-R, DVD+R) has its data-recording layer sandwiched between the polycarbonate substrate and the metal layer (see Figures 4 and 5). This layer is an organic dye. The dyes used in CDs and DVDs are the same basic types; those used in DVDs, however, are patented by the manufacturer, and the disc color does not indicate the type of dye used. The dyes in both CDs and DVDs are photosensitive. Bits (marks) are written to the dye by a chemical change caused by the laser light beam. This dye degrades over time, eventually making the disc unreadable.

The data layer in CD-R discs consists of one of three basic dye types, each yielding a different disc color depending on the type of dye and the type of reflective metal used in the disc. Even on a plain, unlabelled disc, the label side can be a different color from the reading side. If the label side of a recordable disc does not have a printable surface, a label attached, or some other protective layer, it will have the color of the metal used (silver or gold). As for the laser reading side, the color will be as indicated in Table 2.

The data-recording layer of the rewritable optical disc (CD-RW, DVD-RW, DVD+RW, DVD-RAM) also lies between the polycarbonate substrate and the metal reflective layer (see Figures 6 and 7). This is a phase-changing metal alloy film. A laser beam writes bits (marks) to the film by heating the film above the melting temperature in the areas selected for bits. The rapid cooling enabled by the dielectric layers on both sides of the phase-changing film causes these bit or mark areas to remain in the amorphous state caused by melting. By heating the phase-changing film to a specific temperature above the crystalline temperature but below the melting temperature, the film can revert back to the crystalline state, thereby erasing previous bits. The writing and erasing processes can be done together in a single pass when rewriting a disc. 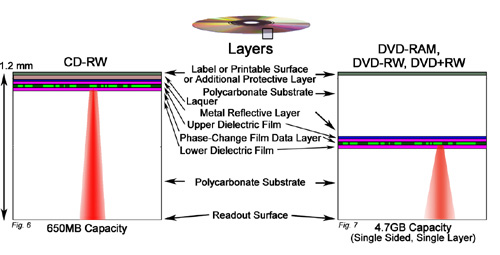 Figures 6, 7: Layers that make up RW and RAM discs

The metal layer in optical discs reflects the laser beam back to the laser photosensor in the laser head. Three types of reflective metals are typically used for this layer: aluminum, gold, and silver or silver alloy. In “double-layer” DVDs, silicon is sometimes used as one of the semireflective layers.

RW, ROM, and RAM discs (CD-RW, CD-ROM, DVD-RW, DVD+RW, DVD-ROM, DVD-RAM) use aluminum for the reflective layer, mainly because it is inexpensive and easy to apply. Aluminum oxidizes on exposure to oxygen from the environment or to moisture that has penetrated the disc. In some earlier CDs, poor sealing allowed oxygen to come into contact with the aluminum metal layer, causing the aluminum to oxidize. Oxidation of the aluminum diminishes its reflectivity, making the disc unreadable by the laser, and is sometimes referred to as disc “rot.” It is the primary cause of ROM disc degradation from environmental influences. Not so, however, for RW and RAM disc degradation; the phase-changing film in these discs normally degrades at a faster rate than the aluminum in the disc oxidizes.

In R discs (CD-R, DVD-R, DVD+R), gold, silver, or a silver alloy is used for the reflective layer. Silver is slightly more reflective than gold but can lose reflectivity with corrosion on exposure to adverse environmental conditions. Silver corrodes through reaction with sulfur dioxide, an environmental pollutant that can migrate through the disc with moisture. Gold is noncorrosive, very stable, and longer lasting, but it is also expensive. Either metal should outlast the dye. Aluminum is not used with these discs because it can react with the dye in the recording (data) layer.

DVD-ROMs can be manufactured with two reflective metal layers that allow the laser to read data from both layers using one side of the disc. These “double layered” DVDs provide up to four times the capacity for content (video, audio, computer applications) as do “single-layered” DVDs. The laser beam must pass through a semi-reflective metal layer to read data from a fully reflective layer. The outer metal layer (silicon, gold, or silver alloy) is semi-reflective; that is, it reflects back some of the laser beam and allows some of it to pass through to a fully reflective layer (aluminum) and then reflect back. Both parts are thus reflected to, and detected by, the photosensor in the laser head, which focuses on one layer at a time. Figure 8 shows the most common construction for single-sided, double-layered DVDs, while Figure 9 shows an alternative construction. 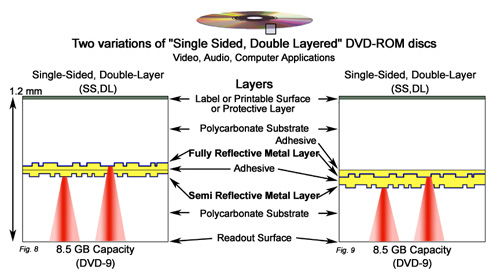 The difference between these two types is that one (Figure 8) has the metal data layers on separate sides (halves) of the disc. In addition to passing through a semireflective metal layer, the laser beam must also pass through a special adhesive that binds the two disc halves together and does not hinder the laser beam. In the example shown as Figure 9, the two metal data layers are on the same half of the disc.

DVD-ROMs can also be double-sided. Figure 10 shows a double-sided DVD that may typically be a DVD-Video providing the video in a full-screen TV version on one side of the disc and a wide-screen version on the other side. When double-sided DVDs also have double layers on both sides, they may have almost quadruple the capacity of single-sided/single-layered DVDs (Figure 11). 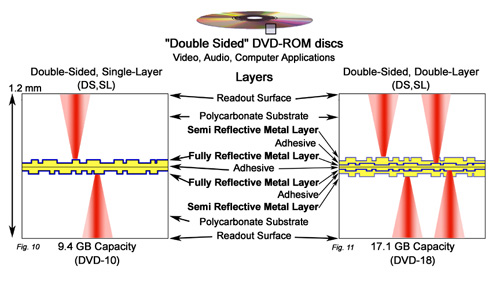 A very thin lacquer layer is applied to the label side of CDs to protect the metal from exposure to the environment. (DVDs have no such protective lacquer coating.) That layer also gives some limited protection from writing on or labeling the disc. However, the CD is more sensitive to damage on this side than on the polycarbonate side. Since the metal layer is so close to the surface of the label side, pointed objects can easily damage the CD by deforming the metal or exposing it to the environment. Some solvents can also affect lacquer coatings and expose or react with the metal. Once the metal is damaged, the laser cannot read data in the damaged areas.

Sometimes a manufacturer will add an additional layer designed specifically to provide more resistance to fingerprints and scratches on the label side of CDs. One particularly effective modification has been the application of lacquer completely around the edges of the disc. In earlier CDs, moisture had been allowed to penetrate to the metal through unprotected areas of the disc edge. Clearly, it is as important to protect the edges of CDs as it is their surfaces.

An optional layer may also be added to a CD or DVD to provide a labeling surface (see “Disk Surface Printing,” page 24). Such surfaces are of four types:

These layers are applied over the lacquer layer on CDs or over the polycarbonate substrate on a single-sided DVD. Some discs have an extra coating on which text or logos are printed. In many cases, the lettering appears to be stenciled, but it is not part of the coating; what one sees is the reflected surface of the metal rather than imprinted text or logos. Typically, one can see through this lettered area-and even through the metal-by holding the disc up to light.